The Italian Tullio Bolletta founded his company La Regale in 1934 in Milan, Italy. During the first years Mr. Bolletta sold  swiss made watches that were not made by himself. The name Lorenz was adopted in 1938, named after that Mr. Bolletta was teaching watchmaking in Berlin for a couple of years. Some 13 years later, in 1951, the Lorenz company produced his first watches in Switzerland and also registered the Lorenz brand name. 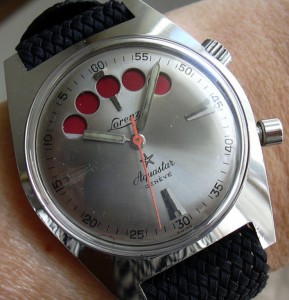 In the 1960’s obviously there must have been a partnership between Lorenz and Aquastar, as several of the Aquastar watches were co-branded with the (older) Lorenz logo as well. Among them is the first model of the Aquastar Regate with the 5-minute countdown and its Felsa 4000N movement. Beside the Lorenz logo on the dial, there were no other markings related to Lorenz on the watch. For more information about this early Aquastar yachttimer, the Felsa 4000N movement and how it works, see the Aquastar 1960’s section here. 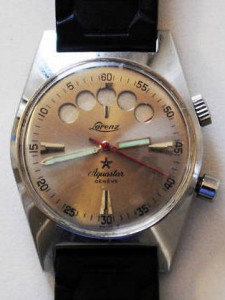 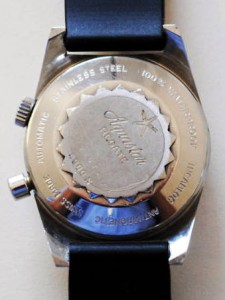 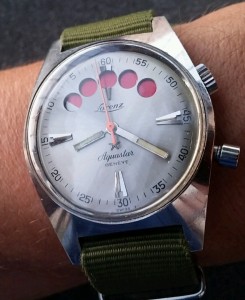 Lorenz Aquastar yachttimer, with its original box and papers.

Beginning of the 1970’s, Lorenz introduced an at least remarkable regatta watch, housed in a 46 mm wide Bullhead case with a matt grey dial and applied hour markers. Inside is a very rare Valjoux 237 movement. 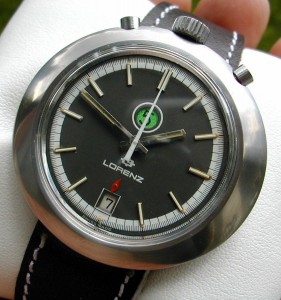 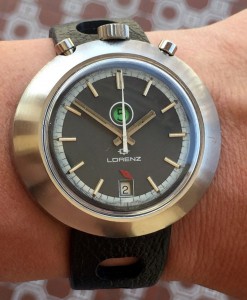 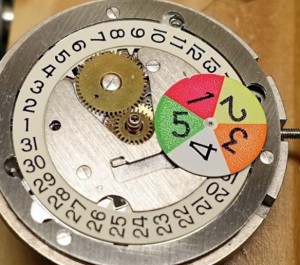 This Lorenz Yachttimer has the crown at 12 o’clock (due to the bullhead case), pushers for Start/Re-start and Reset at 11 and 1 o’clock. It features a date window at 6 o’clock, which is rather unusual for a chronograph of that period, especially on a Regata movement, and a round window for the minutes countdown at 12 o’clock. There’s a little red smal second hand just above the date window.

By starting the countdown, the colorfull indicator disk shows 5 and now moves clockwise every 10 seconds a little bit further. After one minute it shows 4 and so on from 4 to 3 to 2 to 1 minute, and is back at 5 at the starting time. The timer doesn’t stop, but keeps running. The flyback movement allows you to restart the countdown at any time. 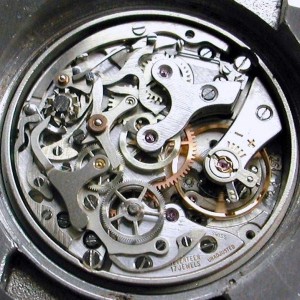 De movement is marked with a shielded R, whereas the R stands for Reymond, the family name of the Reymond Frères who founded the Valjoux company in 1912, and the caliber number 237.

The caliber 237 is listed in a movement chart by Valjoux, and described as a caliber 23 with a permanent return-to-zero function. Only 300 pieces have been produced, which makes the Lorenz bullhead Yachttimer (and later watches using this caliber) indeed a rare one! 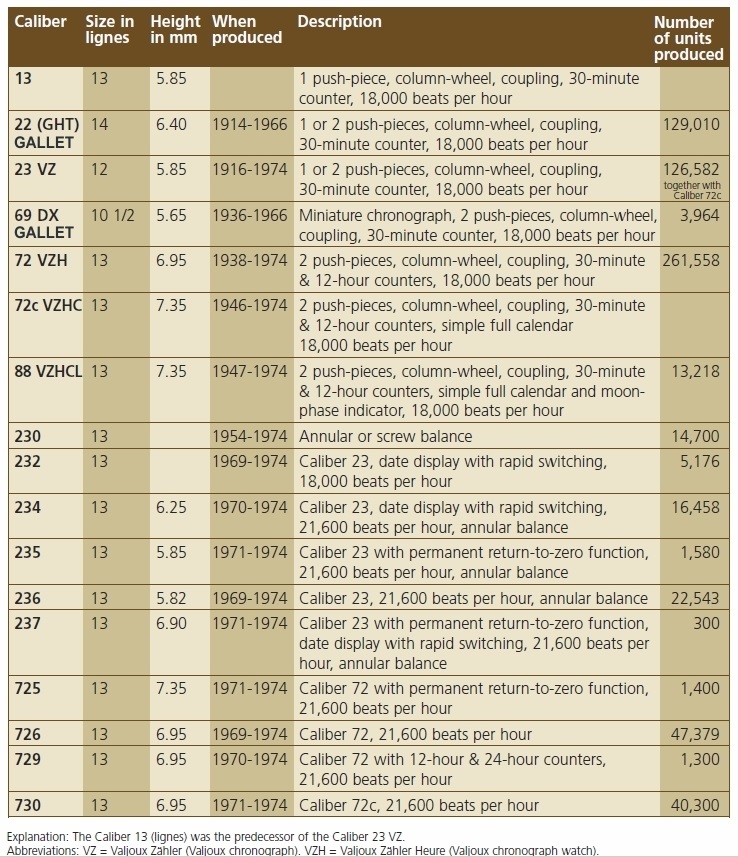 I found two other Yachttimers with the same Valjoux 237 regatta movement. One marked Le Phare and one marked Benytone. You can read some history information about Le Phare in the stopwatch section here. 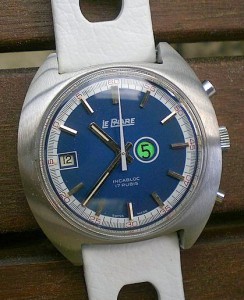 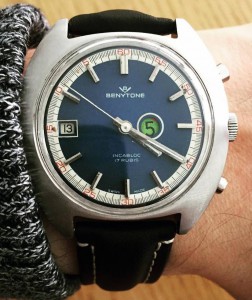 Both watches have the Valjoux 237 movement housed in a ‘normal’ case, with the crown at 3 o’clock, etc. The smal second hand has been removed, and both now have a countdown scale for the central second hand at the outer ring of the dial. The Benytone has a production number 5051 on the caseback; I don’t know about any production number on the Le Phare.

Probably at a litle later date, Lorenz released another Yachttimer now using the manual wound Valjoux 7767 movement inside. Available either with a white dial or a black dial. 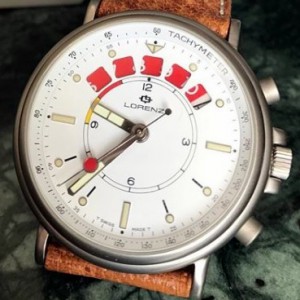 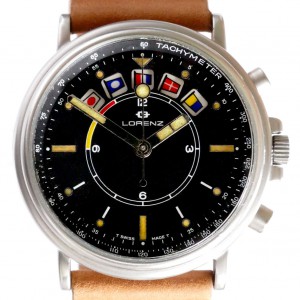 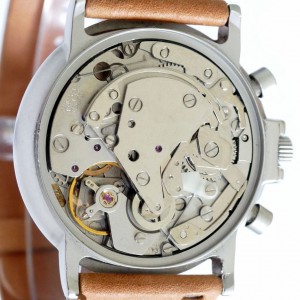 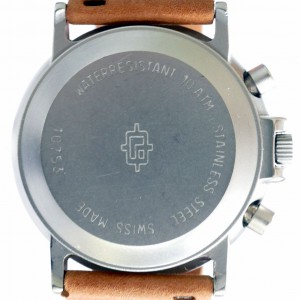 More information about the Valjoux 7767 regatta movement and how the countdown function works, can be found at the Memosail 1972-1982 section in the Brandlist here. The indicator disk inside this Lorenz version, is different from the one used by Memosail. It starts the same way, with white figures 6 – 7 – 8 – 9 – 10 on a red background, then white figures 1 – 2 – 3 – 4 – 5 on a blue background. But the last 5 minutes of the countdown do not show the word S – T – A – R – T in capitals, but as flags from the International Maritime Signal Flags Alphabet. This is clearly visible in the above right picture.

On the caseback there’s a production number 10753. Pietro Boletto confirmed this means that these watches were produced by the Swiss factory  Schwarz Etienne. Some interesting history information about Schwarz Etienne can be read here. 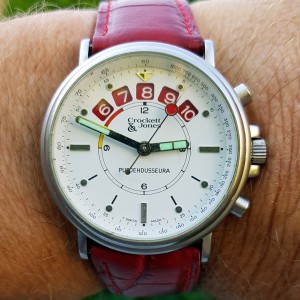 Here is another rare Yachttimer, driven by the same Valjoux 7767 movement. With an equal indicator disk as the Lorenz version above. As also the dials show a lot of similarities, I presume it was issued by Lorenz as well. On the caseback there is the production number 74 43 01 printed. 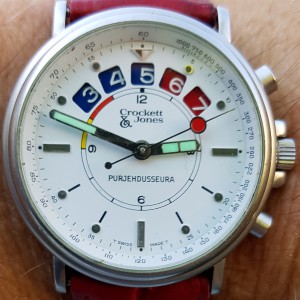 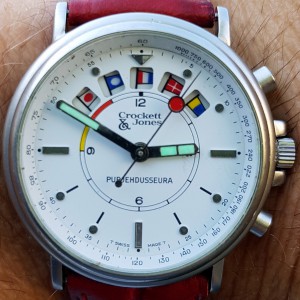 On the dial it says Crockett & Jones, and PURJEHDUSSEURA.

Crockett & Jones today is a shoe manufacturing company in the United Kingdom, established in 1879. Purjehdusseura means Yachtclub in Finish. I have no idea how these two are connected, is there anybody who can help?

As many watch brands, Lorenz also manufactured Yachttimer watches since the 1980’s using a quartz movement. 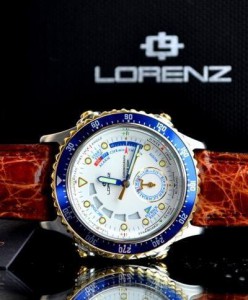 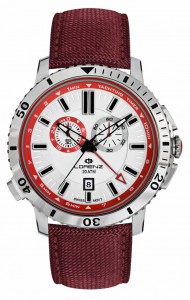