The Hamilton Watch Company was founded in 1892 in Lancaster, Pennsylvania, USA. America was the company’s home for the first 111 years of its life. The Hamilton brand made its name during the early years of the American railroads, as the country built its crucial infrastructure. Hamilton supplied accurate watches that helped to prevent and reduce accidents by synchronizing timing on the rails, and became known as the producer of the ‘watch of railroad accuracy’.

In 1918, as the age of aviation developed, Hamilton supplied watches for the new coast to coast U.S. Airmail service, and has been synonymous with the world of aviation since then.

In 1966 Hamilton took over the Buren Watch Company, and in the late 1960’s both brands made headlines, when together with Breitling, Heuer-Leonidas and Dubois Dépraz, they worked at the project of the world’s first selfwinding chronograph movement (Chronomatic). Since 1974 the Hamilton Watch Company is taken over by the Société Suisse pour l’Industrie Horlogère (SSIH), later becomming the Swatch Group. Eventually in 2003 they moved their headquarters and production to Biel, Switzerland. 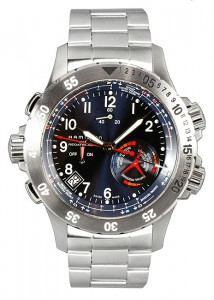 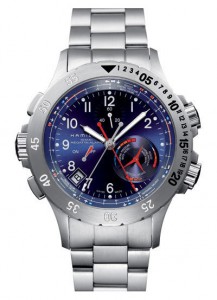 Hamilton Khaki Navy Regatta Alarm with either a black or a blue dial.

This quartz version of the Khaki Navy Regatta (Alarm) is powered by an ETA 251.242 analog quartz movement. If you want to know how the countdown function works, you can download a copy of the manual here. 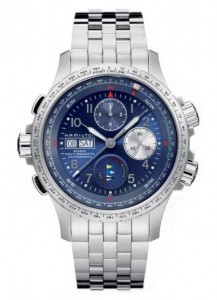 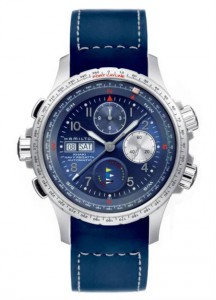 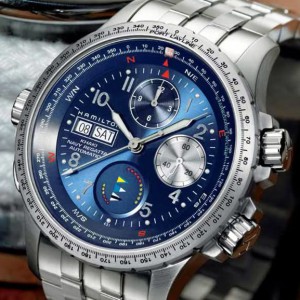 Inside the automatic Khaki Navy Regatta is a slightly modified Valjoux 7750 chronograph movement, mounted ‘up-side-down’. It has the crown to set the time at 9 o’clock, two more crowns to adjust the upper and lower interior rotating bezels, and two pushers for the countdown function. One pusher at 8 o’clock for start/stop and one pusher at 10 o’clock for reset. In the 6 o’clock subdial both a 3/6 minutes as a 5/10 minutes countdown are visualized with little coloured dots. In stead of a hand, this subdial has a coloured indicator disk underneath.

See the below picture. After a reset all little dots colour yellow/red. When the chrono is activated the countdown starts and the sweep hand is set in motion (no countdown scale for the seconds). Like a minute hand, the indicator disk jumps one postion after one minute changing the color of a yellow dot into red, and one red dot into blue. And so gradually all dots change color every minute. At the start of the regatta all dots are blue. Unless you push the stop pusher, the indicator disk doesn’t stop revolving.

Countdown procedure visualized for 5/10 and 3/6 minutes.

More details about the Hamilton Khaki Navy Regatta can be read in the manual, which you can download here.