UNDER CONSTRUCTION, BE PATIENT…….

In 1988 the Memotime S.A. company was founded as a sub-brand for Corum. The company focused on nautical watches (regatta timers, Memosail), dive timers (Memodive) and chronographs (Memostart).

For a new series of yachttimer watches Memotime worked with Conseilray, a watch movement design and manufacturing consulting company, founded in 1977 and active throughout the 1980’s and 1990’s. Together Memotime and Conseilray developed the 883 regatta module in combination with either a Ronda-Harley 775 quartz or an ETA 2671 automatic movement. Due to its size, the ETA 2671 movement is used in many ‘Swiss made’ self winding ladies watches. Unusual the regatta module operates independently of the time-movement and included it’s own battery. Thus the regatta complication 883 is entirely separate from the timekeeping function. 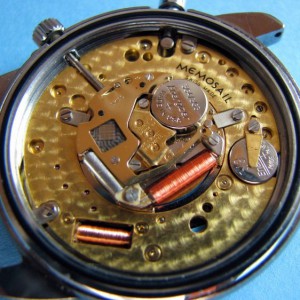 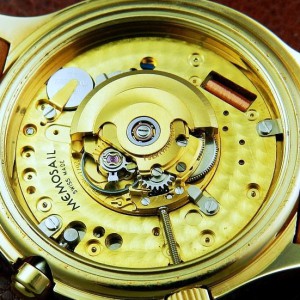 Memosail 883 quartz regatta module with either a quartz or an automatic movement for timekeeping.

The basic time-keeping movement is capped and ringed by a bell-shaped (patented) module containing a battery, an integrated circuit and the countdown mechanism which controls the indicator disk that changes the colour of the five circular holes in the dial, plus a 60-second totalizer subdial at 6 o’clock. This technical solution limits the power drain and provides a constant and independant time-keeping function.

In 1989, at the European Watch Clock and Jewellery fair, the first Memotime model with a 883 regatta module was introduced. In their brand new brochure, Memotime has devided their sport watches in three model series: Regatta,  Skipper-Racing  and Prestige. 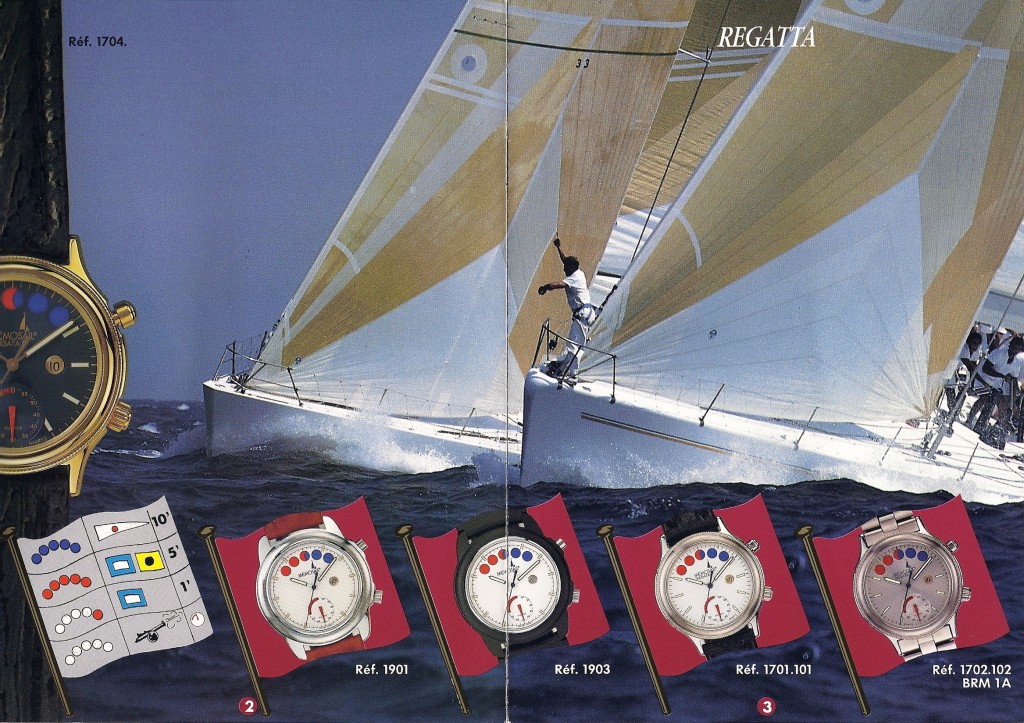 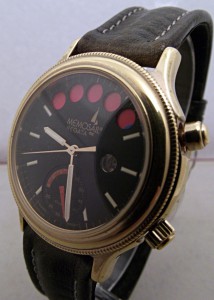 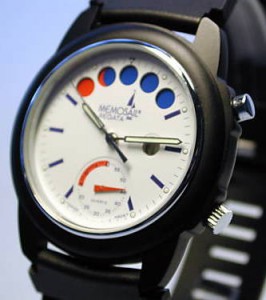 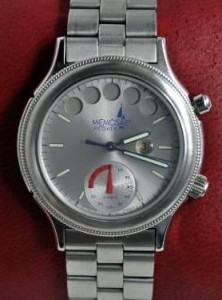 Some examples of the Memosail Regatta models (strangely it is spelled Regata on the dial). Ref. 1704 with a goldplated case and dark dial, ref. 1903 with a black chromed case and white dial, and ref. 1702.102 with a stainless steel case and silver dial. All models in the Regatta series have a double-quartz movement. 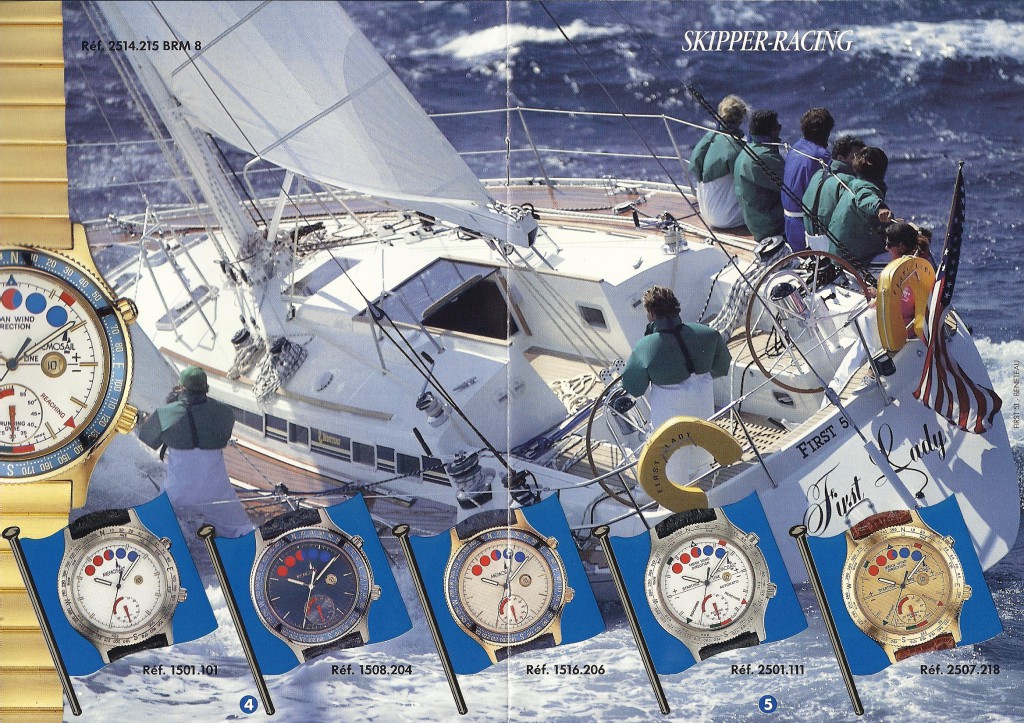 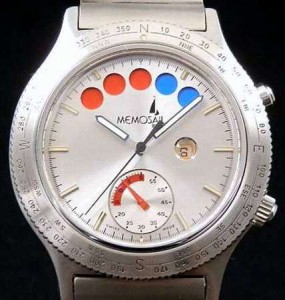 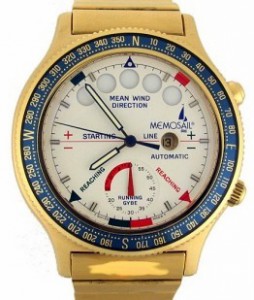 And some examples of the Memosail Skipper-Racing models. Ref . 1501 steel case, windrose bezel and white dial, and ref. 2514 goldplated case, different bezel and white dial. Various models with either the 883 double-quartz or 883 automatic-quartz movement. 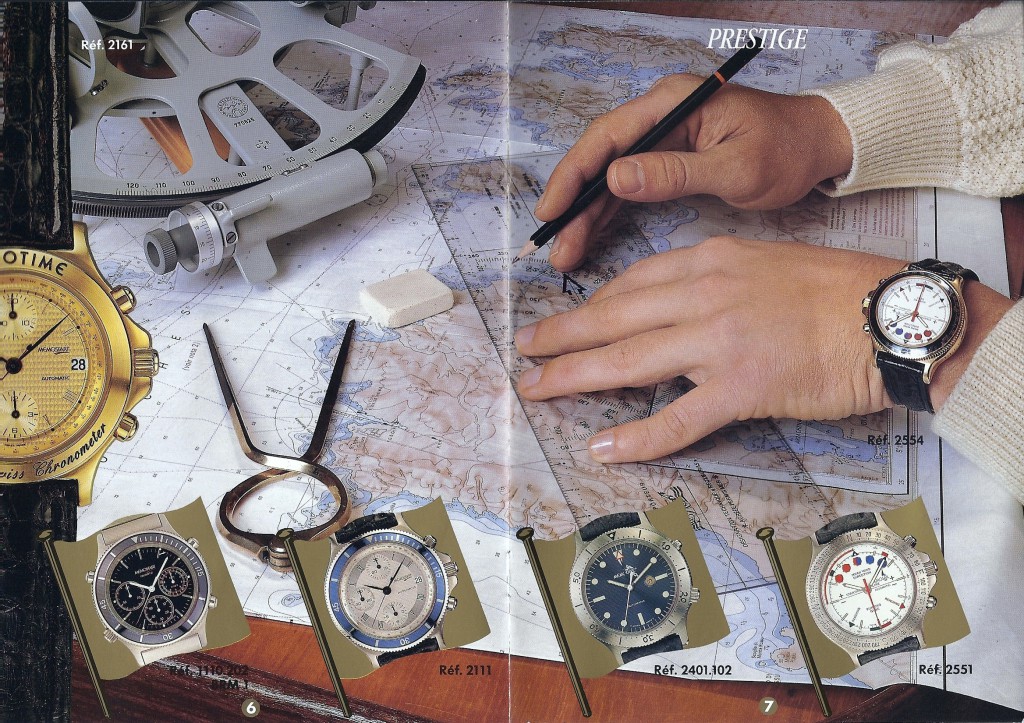 In the Prestige series, there were some Memostart , a Memodive  and two Memosail Automatic  versions listed. This new fully automatic Memosail, ref. 2551 or 2554, was first introduced in 1992. It is fitted with the same Valjoux 7757 regatta movement as used in the 1980’s in the Atlantic Skipper, the Eberhard Azzurra, the Wyler Vetta La Giraglia and the Memosail Automatic. More information and details about the regatta caliber 7757 can be found at the Atlantic section here. The Memosail version also has the Paul Elvström tactical system printed on the dial and all watches are engraved with an individual number (eg. 1-576) on the caseback. 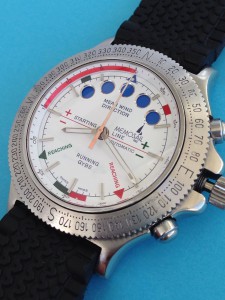 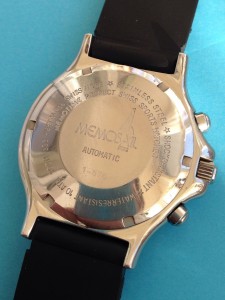 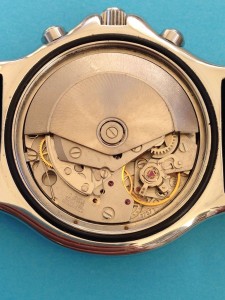 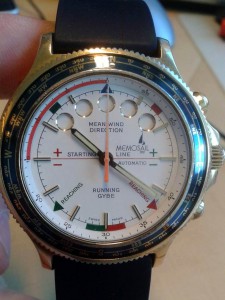 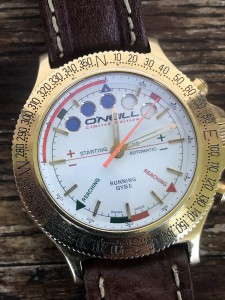 Memosail Automatic ref. 2554 with a Valjoux 7757 regatta movement, serial 1-668. At least one special was made, showing this O’Neill Limited Edition in the right picture.

Apparently the new Memosail automatic  ref. 2551 was made in cooperation with Atlantic, when they developed their Atlantic Skipper.  Take a closer look to both watches, and judge for your self: 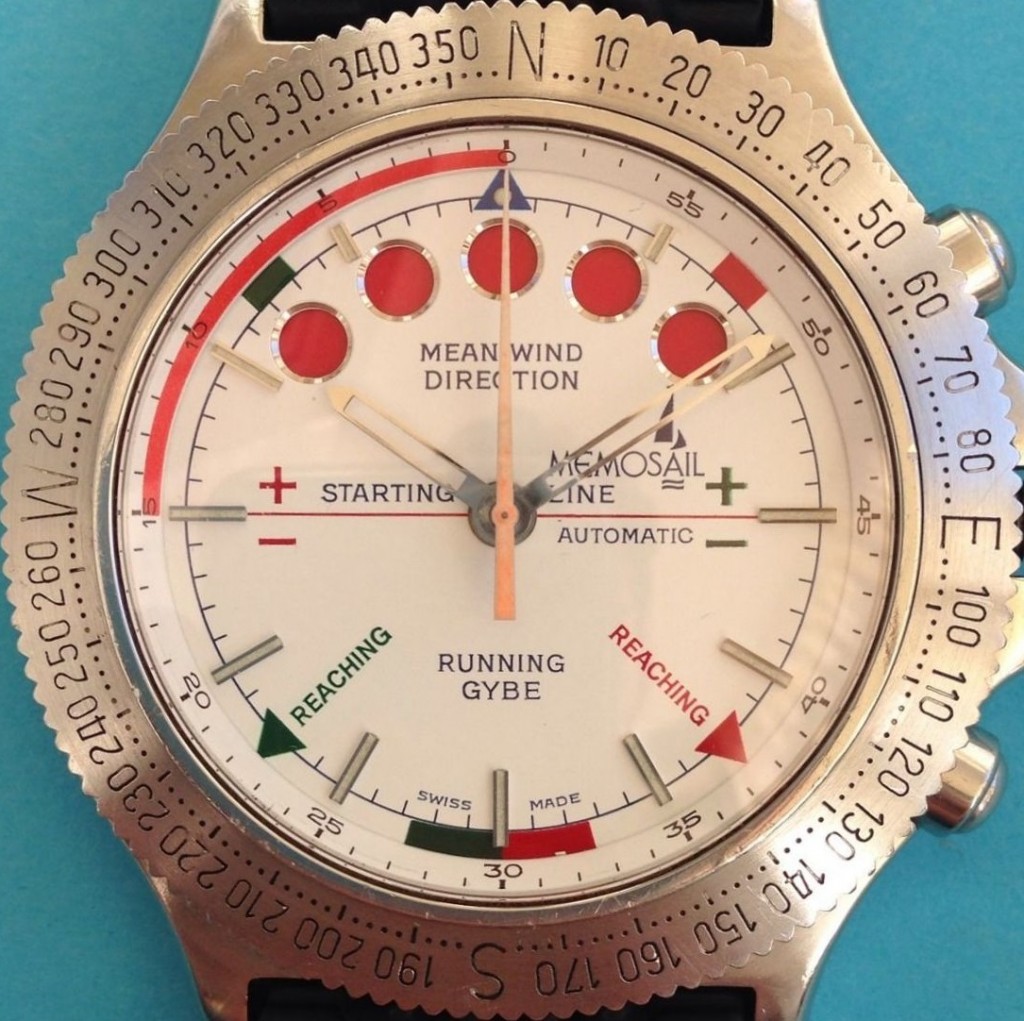 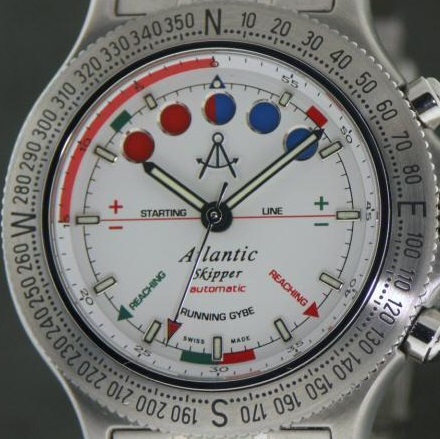 Memosail Automatic and Atlantic Skipper, both with a Valjoux 7757 movement and resembling dial and bezel.

A little earlier in 1989, also at the European Watch Clock and Jewellery fair, Memotime introduced a series of colourful countdown watches named Memosurf  and Memosail-fun. All of these models are housed in a carbon fibre case, driven by the earlier double quartz movement (quartz Ronda-Harley 775 movement with the Memosail 883 countdown module) and with a matching coloured strap signed Memotime.. Rather than use a traditional layout with the crown and pusher placed on the right side, the movement is rotated 90º inside the case repositioninng the crown and pusher at 12 o’clock, resulting in the ‘Bullhead’ layout as seen in vintage chronograps by Breitling, Seiko and others. 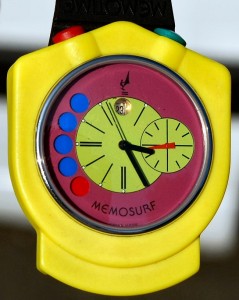 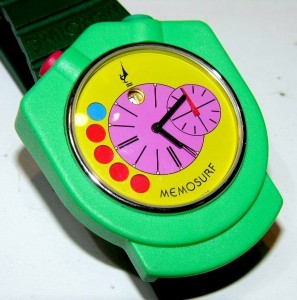 Memosurf in yellow and green, with black hands. 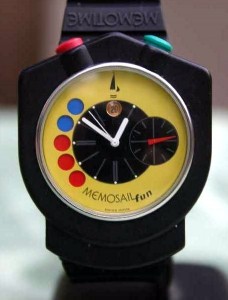 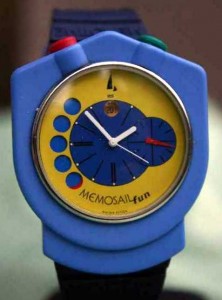 Memosail-fun in black and blue, with white hands. 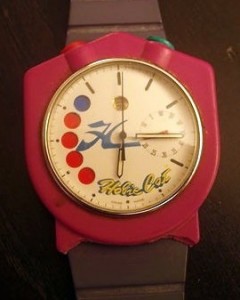 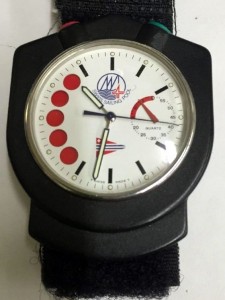 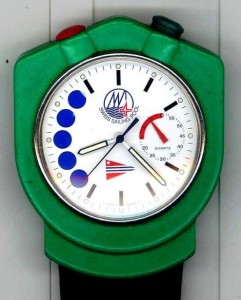 Obviously some Special Editions where made as well. Here a red version for HobieCat, and a black and a green version both for the Swiss Sailing Pool. All three with different hands.

In 1992 Memotime is the official sponsor for the defending yacht America 3 in the America’s Cup.

At some point in time the Memosail Skipper and Skipper Jubile…

UNDER CONSTRUCTION, BE PATIENT……. 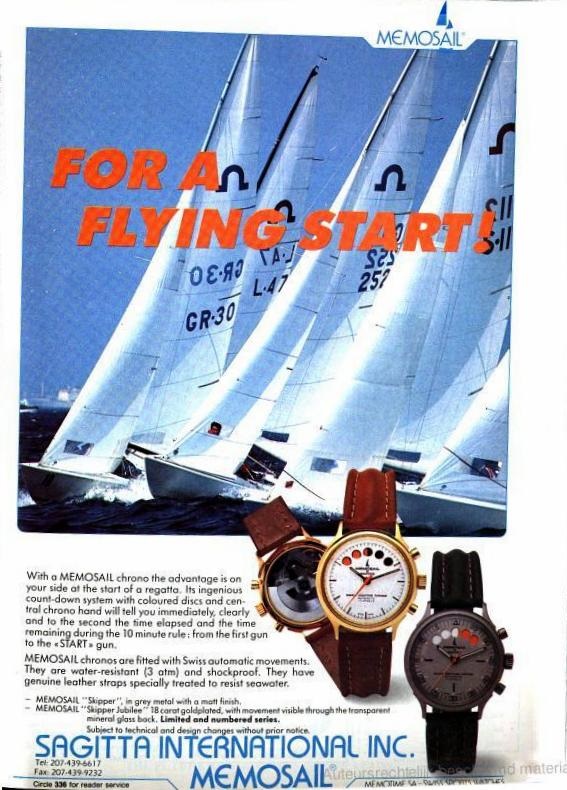 Ad for the Memosail Skipper in the US magazine MotorBoating feb-jun 1990.

In 1999 when Memotime faced the Asian Financial Crisis, Corum shut down their daughter-company and Memotime was sold to LNC in 2001.

I added some pictures I got from Bruce Mackie of an amazing and very rare unbranded Yachting stopwatch. Please do check out the Stopwatch section!

2022.01.06 I did some more investigation of the history of Seiko's Yacht Timers. They produced several models, which are now listed in the Brand list.

2021.04.17 In a couple of days the new BOLDR Odyssey Regatta will be for sale! I added the brand to the Brandlist. Soon you can vieuw a life picture on my Instagram account.