In 1860 Giovanni Panerai opens his watchmaker’s shop and workshop Guido Panerai & Figlio in Florence, Italy. The shop later moves to its current location in Piazza San Giovanni in Rome. The family Enterprise, later renamed to Officine Panerai, is initially concerned with the production of nautical precision instruments. For a long period many kinds of equipment for the Royal Italian Navy were manufactured.

Beginning 2013, at the SIHH (Salon International de la Haute Horlogerie Geneve), Panerai introduced the PAM00526 Luminor 1950 Regatta 3 Days Chrono Flyback Automatic Titanio. This is a flyback chronograph with an automatic movement and a three-day power reserve, fitted with the Regatta countdown function, specifically created for yacht racing starts. Very similar to the PAM00524 and PAM00525 (all three pieces comprise the entirety of the new models in the 2013 ‘Contemporary’ collection) except it comes with a Regatta timing module built on to the automatic P.9100 caliber. The button at 4 o’clock (right below the crown guard) is for the regatta function. It is in orange, as the orange split second hand, the orange sword hand on the hour sub-dial and the orange regatta track. On the outer-ring the watch has the countdown minutes scale, as well a knots scale for measuring the boat speed. 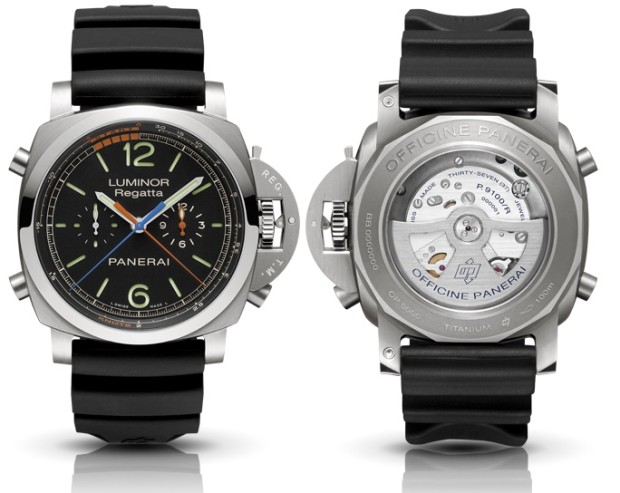 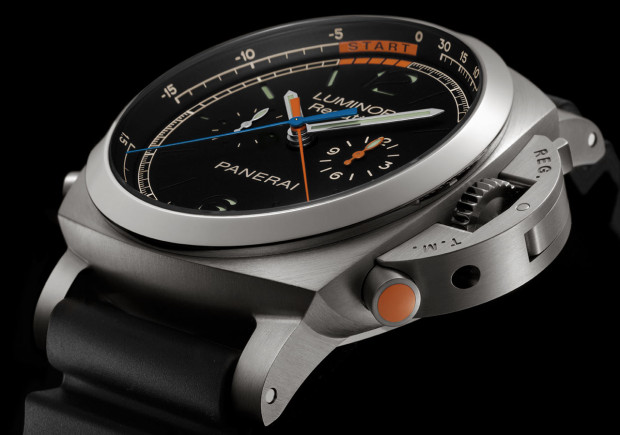 How the Regatta Timer and Flyback Chrono work:

The orange push-button at 4 o’clock moves the central orange chronograph minute hand back one minute at a time, until it is at the correct position in relation to the length of the countdown. On starting the chronograph, by pushing the chronograph stop/start button at 10 o’clock, the relative hands begin to move, indicating first the minutes and seconds remaining until the start, and then, when the countdown has finished, the time elapsed since the start of the race. The push-button at 8 o’clock ends the time measurement, returning all the chronograph hands to zero. Alternatively, if it is operated while the hands are still moving, it activates the return-to-zero (flyback) function, thus enabling a new time interval to be measured immediately without operating the stop and reset buttons.

Rather uncommon is the tachymeter scale along the flange in knots (nautical miles per hour) in stead of kilometers per hour, which can be used to calculate the average speed of a yacht over a distance of one nautical mile. 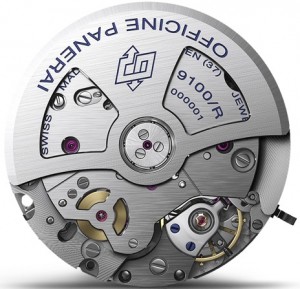 Caliber P.9100/R is a further development of the Panerai P.9100 chrograph, with a regatta countdown function. 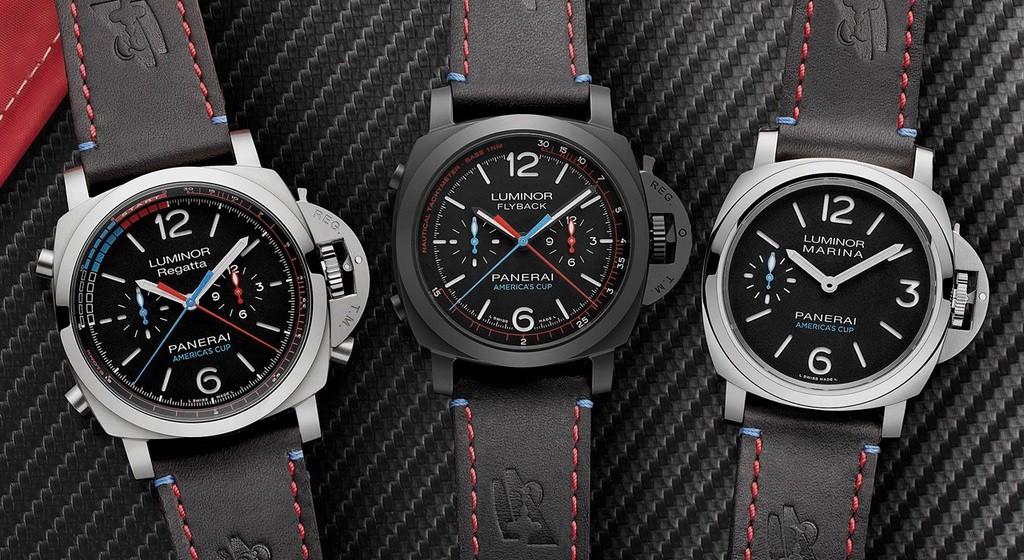 In 2017 Panerai becomes the new official timekeeper of the 35th America’s Cup, to be sailed on the great Sound of Bermuda. For the event the brand launched not less than five new America’s Cup models. All Limited Editions of 150 – 300 pieces. 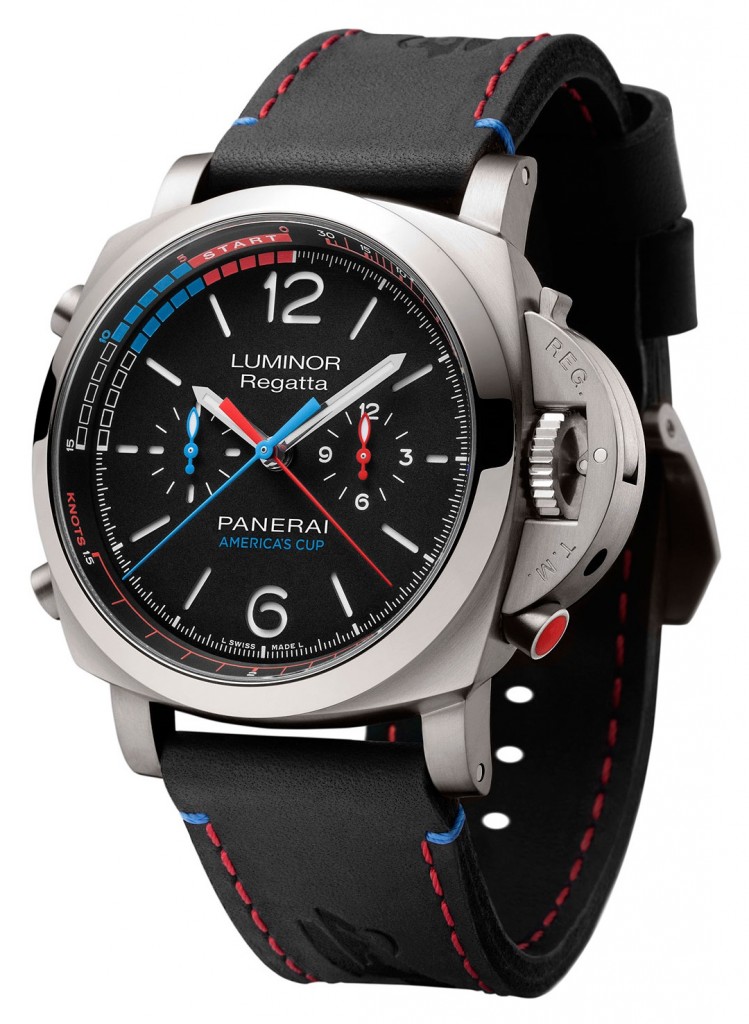 In addition to being the events timekeeper, Panerai also partnered with two of the competing teams: the defending Oracle Team USA and SoftBank Team Japan, the first cup competitor from Asia in 15 years.

One of the Oracle Team USA watches is a special edition of the 2013 launched PAM00526, now referred to as PAM00726 Luminor 1950 Regatta Oracle Team USA 3 Days Chrono Flyback Automatic Titanio, limited to 200 pieces.

The dial is even more colourful, with America’s Cup printed in blue at 6 o’clock.

The watch comes with a black untreated leather strap with the AC logo on both sides and is stitched with blue and red thread.

Like the other two Oracle Team USA editions, it has a solid caseback with a relief engraving of the team’s logo and an illustration of its trimaran boat.

In reference to the 13th edition of the Panerai Classic Yacht Challenge (PCYC) in 2017, the brand offers three new special PCYC timepieces to the public. One of them is equiped with the Panerai P.9100/R flyback regatta movement: the Panerai Luminor 1950 PCYC Regatta 3 Days Chrono Flyback Automatic Titanio, Ref. PAM00652. The case is made of lightweight brushed titanium, and has a contrasting polished bezel. The strap is made of natural untreated leather and has a titanium OP-stamped clasp. On the caseback an ingraving of a classic yacht, and the text ‘Panerai Classic Yacht Challenge’. 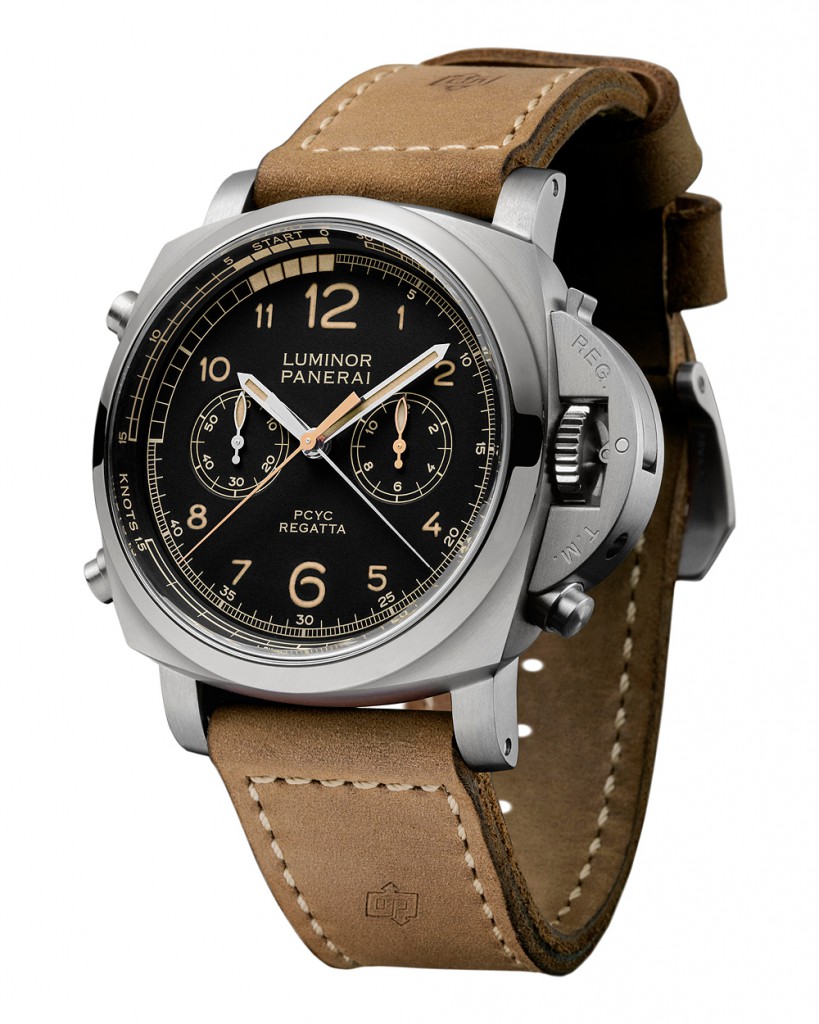 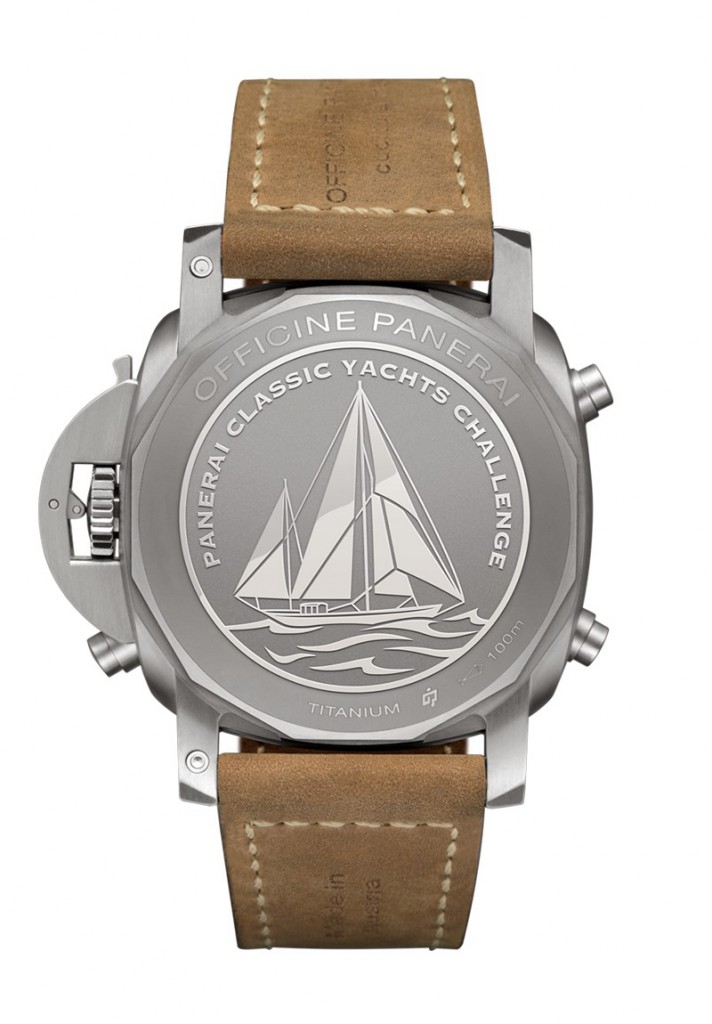 Late 2018 the brand dedicates a watch from the Luminor 1950 Regatta family to the Regatta Transat Classique, one of the most extreme and exciting 3000 mile Atlantic crossing race for classic yachts starting beginning of 2019 from Lanzarote (Canary Islands): the Panerai Luminor Regatta Transat Classique 2019, ref. PAM00956. It has a closed, engraved caseback referring to the race. 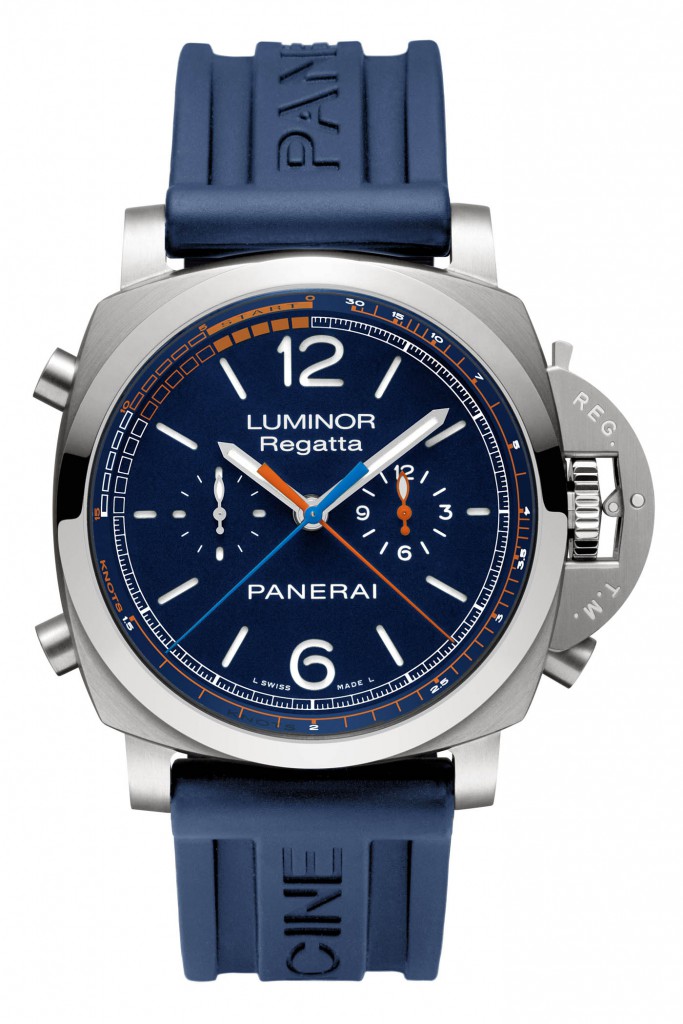 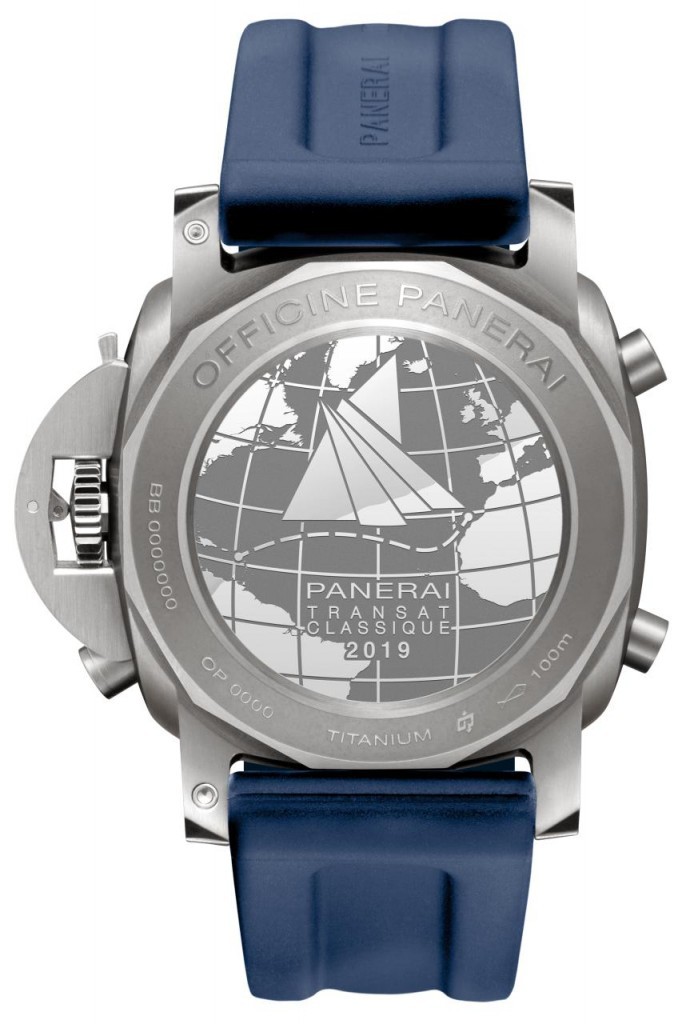 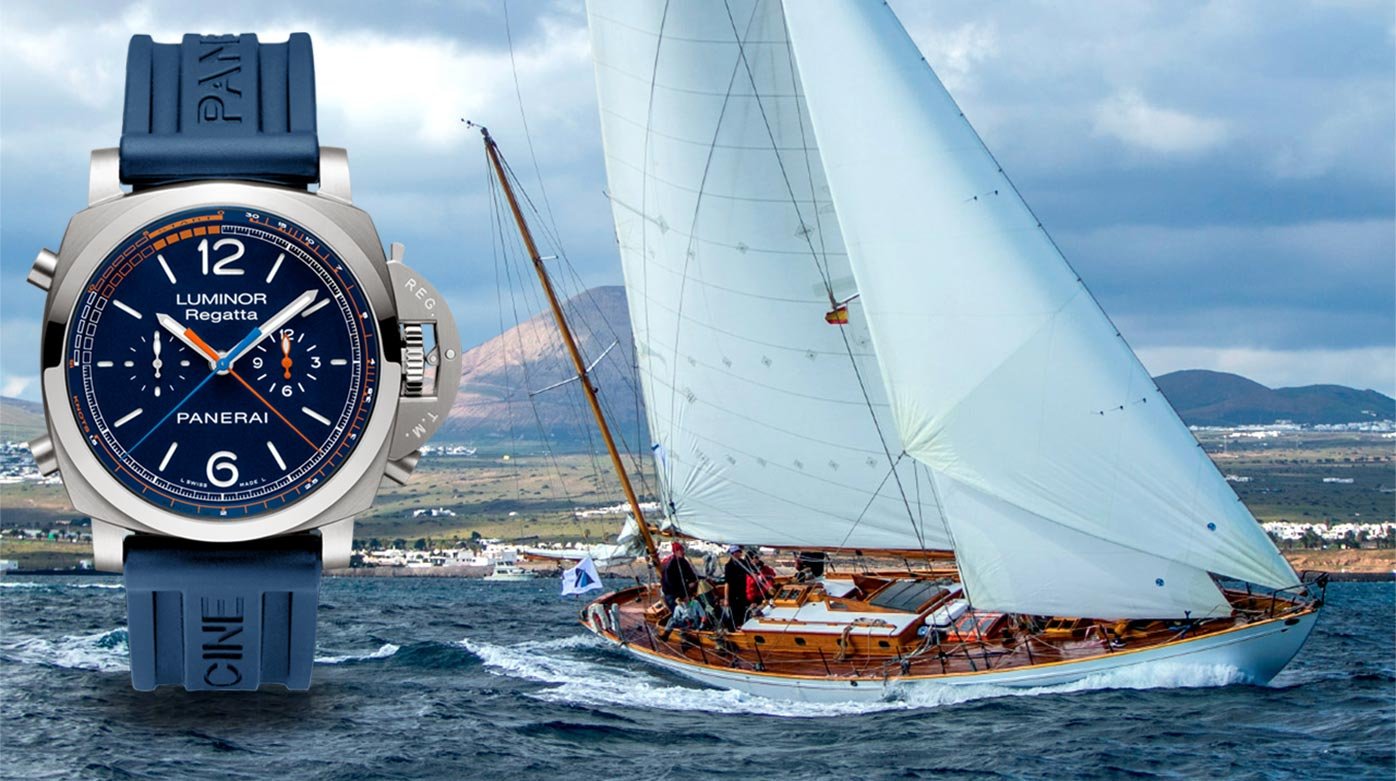 Panerai’s own 1936 Bermudan Ketch, the Eilean, will be competing in the 3000 mile sailing race, with the start at Lanzarote and the finish at St. Kittes in the Carebean.

January 2019, at the SIHH salon at Geneva, Panerai announces that the brand will be the new official partner of the Challenger Luna Rossa, the AC75 monohull that will represent Italy in the next 36th America’s Cup sceduled for 2021 in New Zealand. For this event the brand presents four new watches specially designed in the colors of the Italian team and dedicated to water sports: the Luminor Luna Rossa series.  The watches of the Luna Rossa collection are characterized by a precious engraving on the back, featuring the Luna Rossa logo and America’s Cup profile.

The partnership with the Italian Luna Rossa team is the perfect occasion for Panerai to create a new collection of watches directly inspired by the materials and technologies used by the yachts competing in the America’s Cup. For the cases of the watches lightweight and corrosian-resstant materials ar used, like carbon fible (Carbotech), micro-sandblasted black ceramic and black DLC-coated titanium. The dials of the series are covered in dark grey sailcloth and have the same red and white details as the Luna Rossa logo! 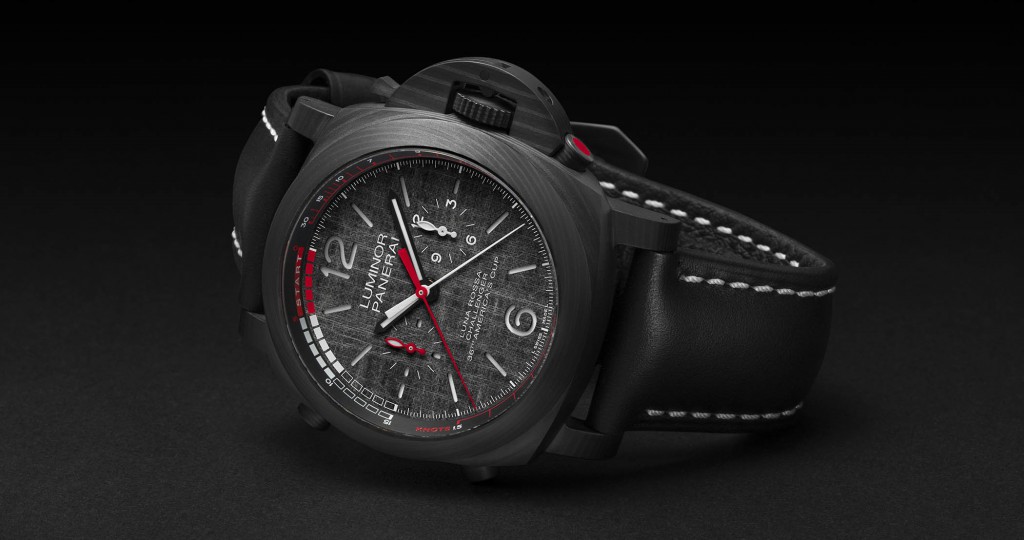 One of the watches is equiped with the Panerai P.9100/R flyback regatta movement:  Panerai Luminor Luna Rossa Regatta, ref. PAM01038. Of course it has the same features as earlier models with this caliber, like the yachttimer function and the tachymeter scale in knots.