To make their dream come true, the Dutch Herbert Dercksen, Olympic sailor with several national, European and World titles to his name, and Frans Dingerdis, also sailer and sales & marketing specialist, founded in 1998 the watch company Tack & Gybe International B.V. (TNG). In cooperation with Peter Stas, owner and managing director of the Swiss Frederique-Constant, and also Dercksen’s nephew, they developed the TNG Tornado Yacht Timer. The new developed quartz regatta movement TG-298 does not only have the possibility to preset the traditional 5 and 10 minutes start, but also the new 3 and 6 minutes to comply with both the Olympic racing rules of sailing and the International Sailing Federation (ISAF) starting procedures. See also the Frederique-Constant section in the brand list. 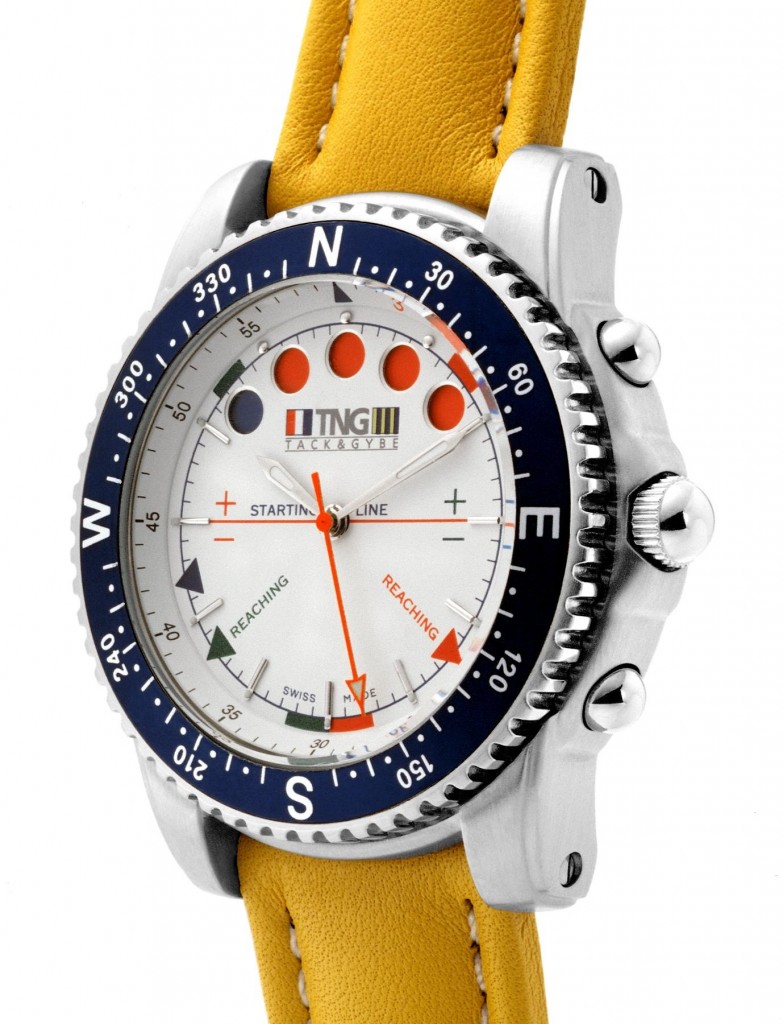 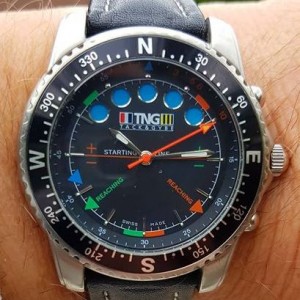 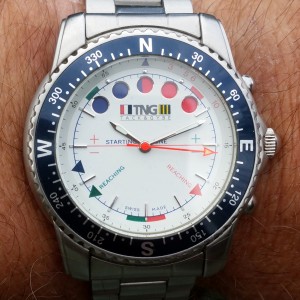 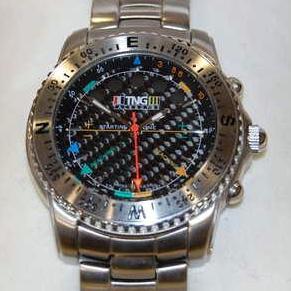 Three of the many variations of the TNG Tornado, with either a black, a white or a carbon dial.

After the Tornado, Tack & Gybe launched a variaty of other models, all related to watersports. The Baltic Cup, the Racemaster, the Matchracer, the GMT Jules Verne, the Oceanracer and the Sailmaster.  All in various colourful versions, and although some of them have a mechanical movement, non of them have a special mechanic countdown system. 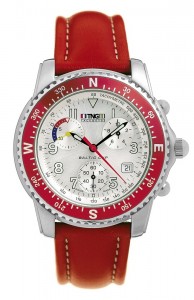 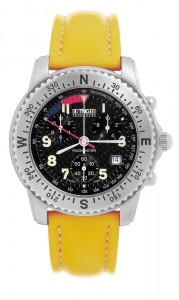 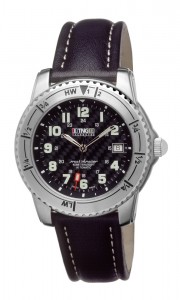 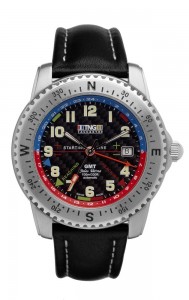 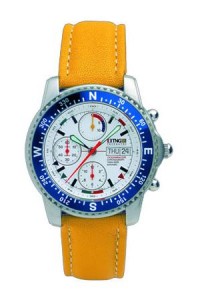 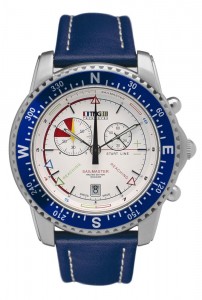 In 2004 the Austrian watchmaker Richard Habring (Habring Uhrentechnik OG) was asked by Tack & Gybe to investigate the possibilities of developing an automatic version of the Tornado, based on a ETA/Valjoux 7750 chronograph movement. The same caliber that was used before by both Atlantic, Eberhard, Memosail and Wyler Vetta in the 1980’s for their Regatta Yachttimers. As the regatta caliber 7757 was no longer available since 1988, Habring had to reproduce it on CAD starting again with the 7750 first. Doing so, two prototypes were made. One similar to the previous quartz version and one with an extra 60-minutes counter hand from the center. 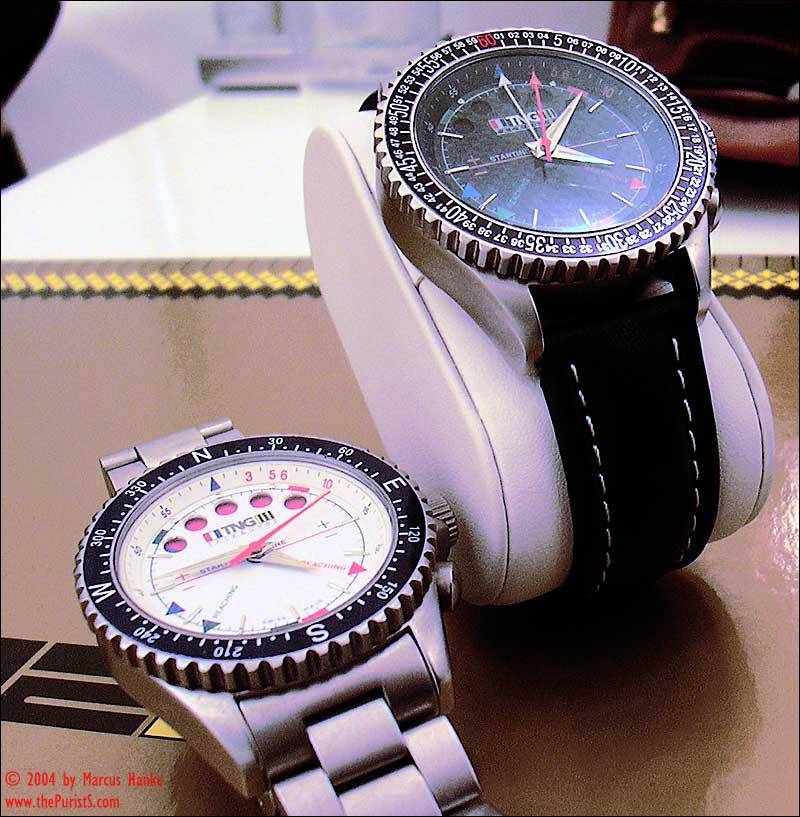 Prototypes of a TNG Tornado MkII with automatic movement.

In the third edition (2005) of their watch brochure though, the Tornado with quartz movement has been replaced by one with an automatic movement, named the Tornado MkII. Unfortunately due to financial reasons this automatic MkII was not been taken into production. On special request only very few models of the Tornado MkII  have been made, so they are very scarce. 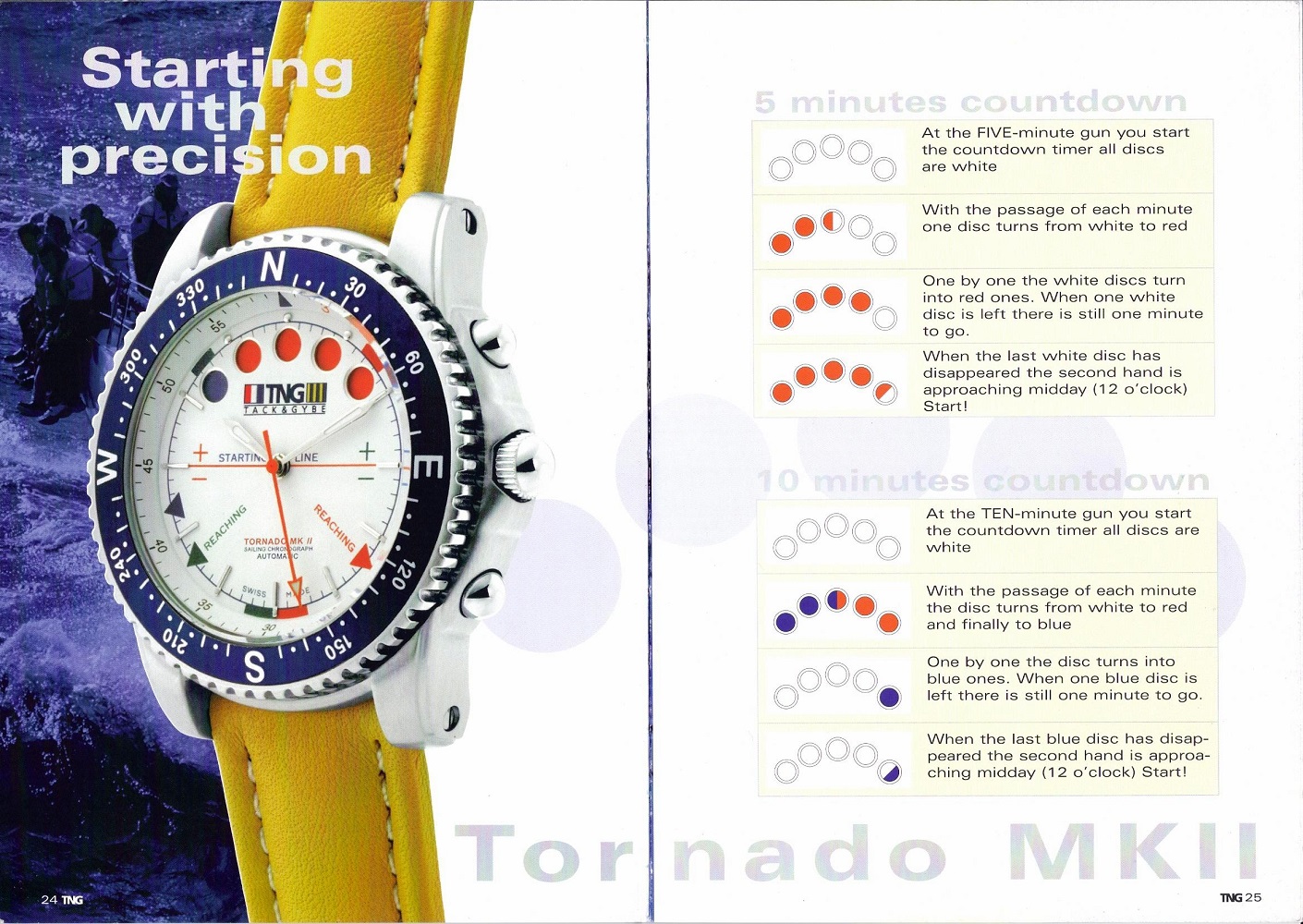 Introduction of the TNG Tornado MkII in the 2005 watch brochure……

Then in 2015, 17 years since the introduction of the first TNG Tornado with quartz movement, and 11 years after the first prototypes, Tack & Gybe introduced a new flagship to their model range: the new Classic Tornado with automatic movement. Finally the new regatta movement was taken in production, after a long period of research and testing. A great combination between Dutch design and Swiss made perfection! 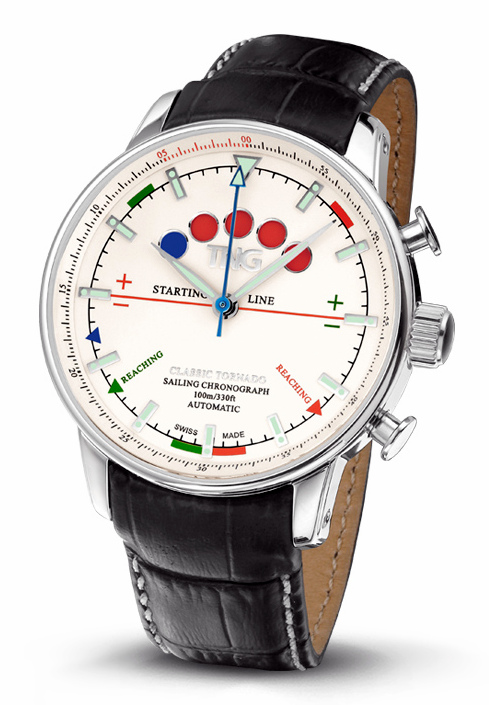 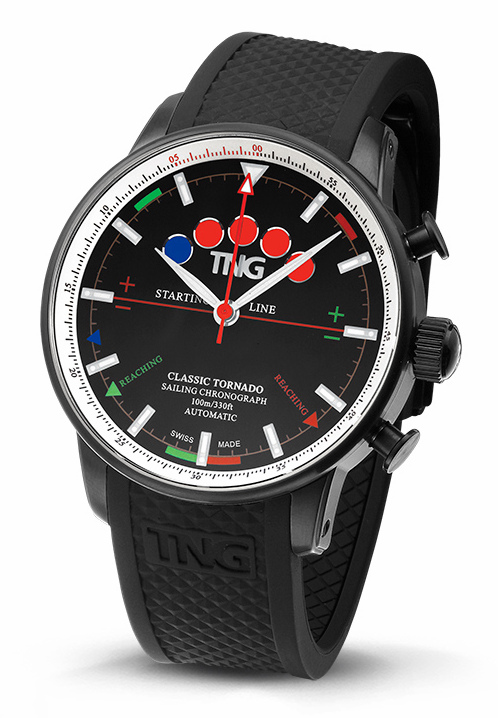 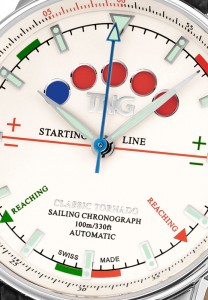 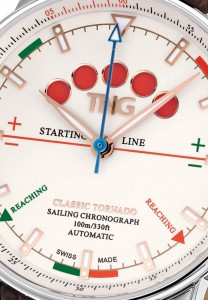 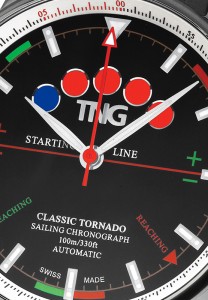 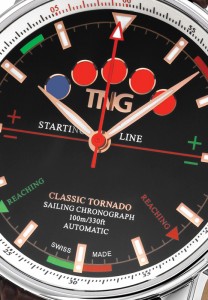 As this new caliber TNG-7750H is also derived from the basic caliber 7750, the functioning is more or less equal as the regatta caliber 7757. The Classic Tornado has the crown to set the time at 3 o’clock, and two pushers for the countdown function. One pusher at 2 o’clock for start/stop and one pusher at 4 o’clock for reset. Under the dial lays the indicator disk coloured white (black in the black-dial version), red and blue. There are five round apertures cut out of the dial, between 10 and 2 o’clock.

After a reset all five dots colour white (or black) and the second hand with the big tip sets to zero. When the chrono is activated the countdown starts and the sweep hand is set in motion. The indicator disk runs continuously clockwise. After one minute the first dot colours red, and after five minutes all 5 dots colour red. Again one minute later, so after 6 minutes, the first dot colours blue. And after 10 minutes all dots colour blue. Unless you activate the stop pusher, the indicator disk doesn’t stop revolving. After another 5 minutes it’s coloured white again, and so on. So the regatta countdown function can be used for a 5, 10 or even 15 minute regatta start. 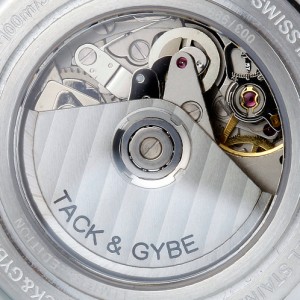 The TNG-7750H movement is being produced as a limited edition, with a maximum of 999 pieces.

Apart from the Classic Tornado Tack & Gybe introduced 14 other models, divided in a ‘Classic’ and a ‘Sports’ range. Among them is a new (bigger and more colourful) version of the Sailmaster, with the quartz ISA 8270 Yachting movement. 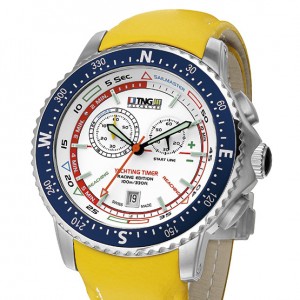 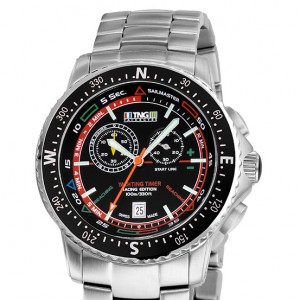 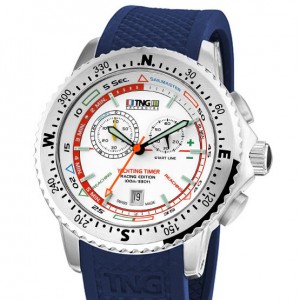 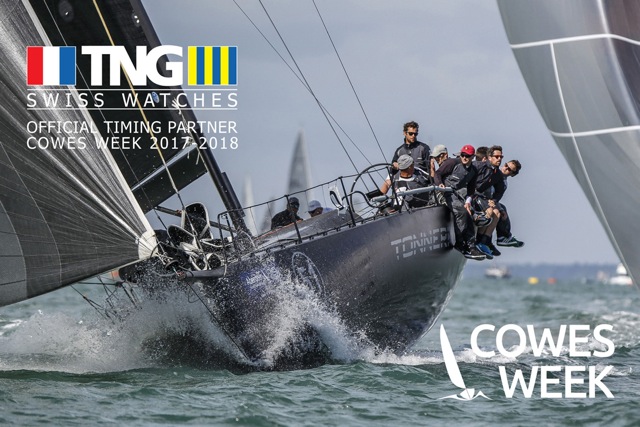 Since the start of the company in 1998, Tack & Gybe has been sponsoring many international sailing events. For 2017 the brand has announced to be supporting sponsor and the official Timing Partner for the 2017 and 2018 editions of the Cowes Week, as well as sponsor and official Timekeeper for the third edition of the Ibiza Regatta Gold Cup. For these occasions several special editions of their watches have been made. Among them are versions of the Classic Tornado and the Sailmaster. 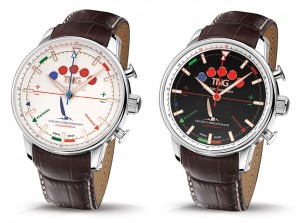 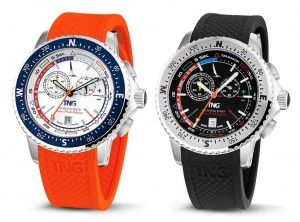