Louis Vuitton founded his fashion house Louis Vuitton Malletier in 1854 in Paris, France. The brand is mainly known for their luxury small leather and travel goods, but started to manufacture watches in their first workshop at La Chaux-de-Fonds, Switzerland in 2002. The first Tambour models were launched later that year. 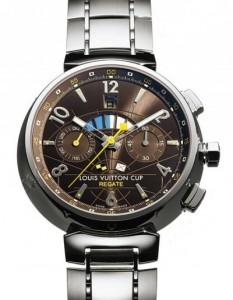 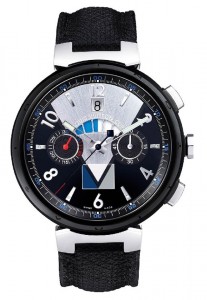 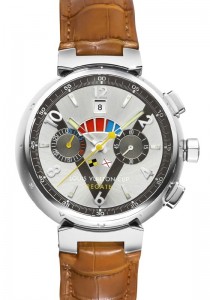 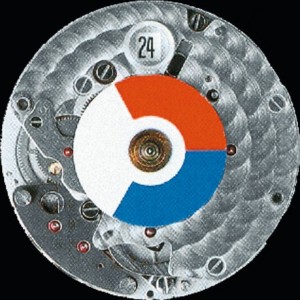 Base caliber is an ETA 2892-A2 movement with a DD 2140 regatta module integrated. This was the first regatta movement to feature a date window at 12 o’clock. 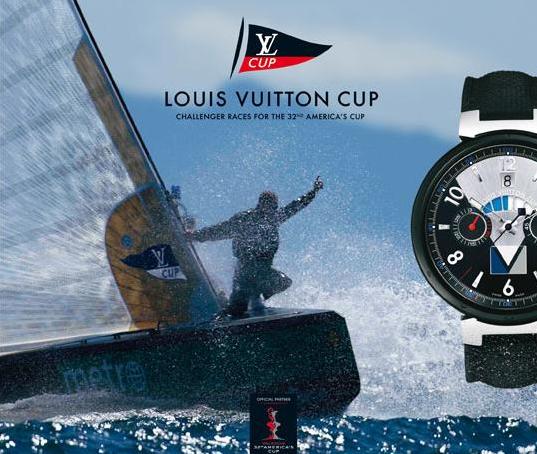 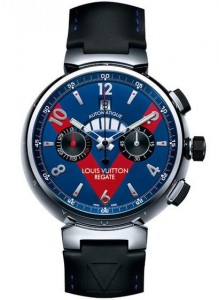 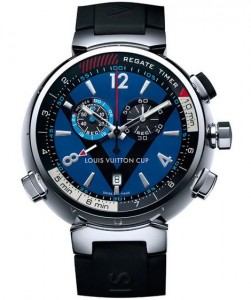 2012. With the upcoming 34th America’s Cup in 2013, and Louis Vuitton being the official timekeeper, the brand launched two new watch models to mark the event, the Louis Vuitton Regatta America’s Cup with either an automatic mechanical or a quartz movement.

With the arrival of the extremely fast AC72 catamarans for both the Louis Vuitton Cup and the America’s Cup, the racing rules have been changed with a first gunshot 5 minutes prior to the start of the regatta. Therefore the mechanical version has a 5-minute (4 + 1) countdown, with two windows in the dial. 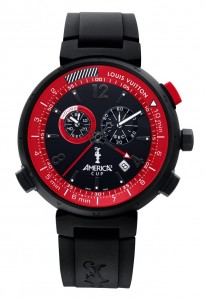 The mechanical version of the Tambour Regatta America’s Cup  is available as a limited edition of 720 numbered pieces, in reference to the size of the competing catamarans with rigid wing sails, 72-foot AC72’s.

The quartz version of the Tambour Regatta America’s Cup  is available as a limited edition of 1851 numbered pieces, in reference to the date which the America’s Cup was founded 22 August 1851, in the presence of Queen Victoria. 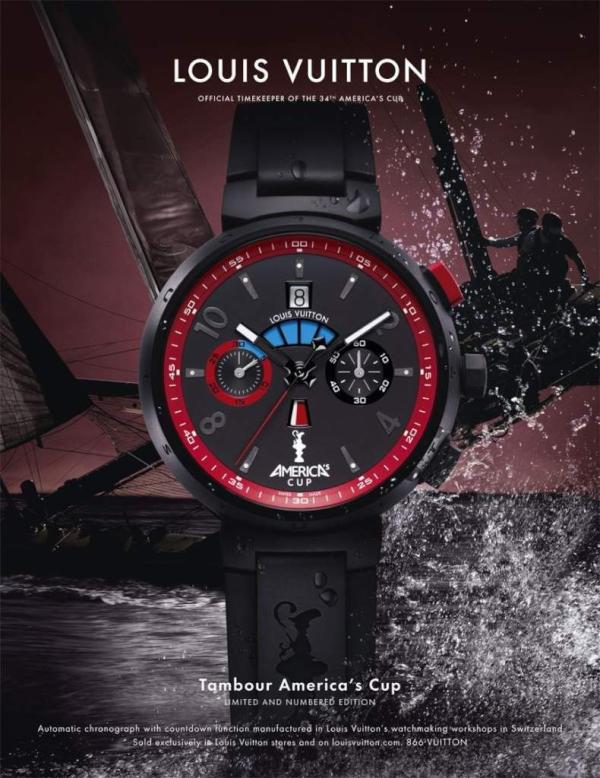 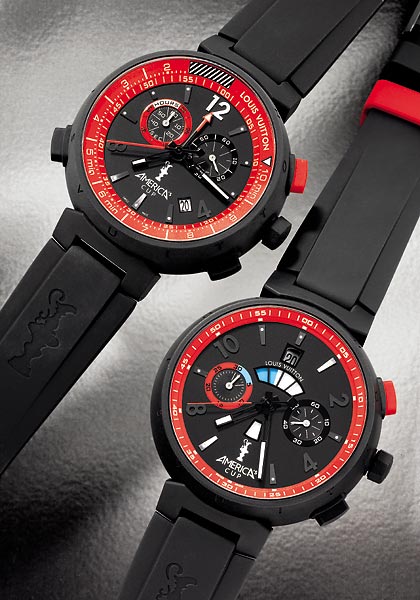 As major fashion house Louis Vuitton designed their LV Cup collection 2012 for sailing enthusiasts as well as urbanites seeking a nautical style (ready-to-wear, leather goods, shoes and accessories). And to mark the 10th anniversary of the Tambour line, the LV Cup collection 2012 also contains a new regatta watch, the Tambour LV Cup Automatic Countdown. It has the LV Cup logo engraved on the back and displayed on the dial. 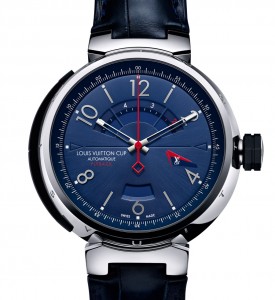 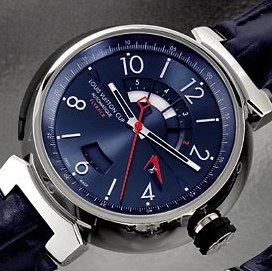 The watch has the crown to set the time at 3 o’clock, and two pushers to activate the 5-minute countdown are placed on the opposite side of the crown. Both the crown and pushers are overmolded with rubber. After starting the countdown the first 4 minutes tick by through a large aperture in the dial between 10 and 2 o’clock, while the last minute is displayed in red through a smaller aperture at 6 o’clock.

In 2010 Louis Vuitton had introduced the extraordinary Tambour Spin Time collection, where the hours are revealed by cubes which rotate simultaneously to show either a neutral or a numbered face thanks to a unique and patented mechanism.

In 2012 the brand launched the Louis Vuitton Tambour Spin Time Regatta  (white gold and titanium version). The innovative movement can be used either as a chronograph or as a 5-minute regatta countdown, visually indicated on the dial by 5 rotating cubes. In 2013 a pink gold version followed in a limited and numbered edition of 100 pieces. 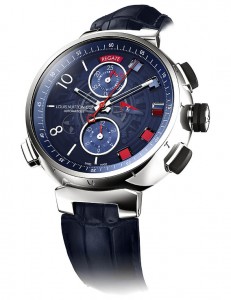 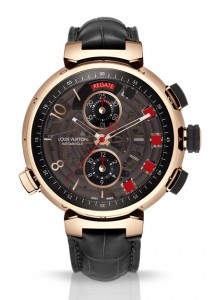 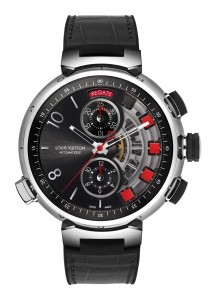 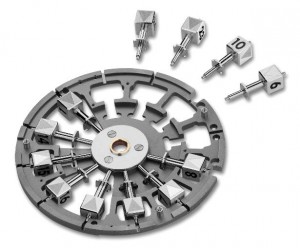 The picture shows how the rotating cubes of a regular Spin Time watch are configured in the dial. Normally the 12 cubes mark the hours, but in a Tambour Spin Time Regatta only 5 cubes are used showing the 5-minute countdown of the race. 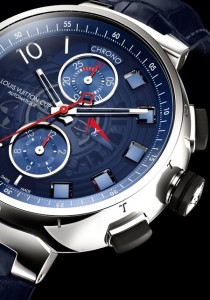 The watch has the crown to set the time at 3 o’clock, one pusher at 2 o’clock for start/stop and one pusher at 4 o’clock for reset. Again the crown and pushers are overmolded with rubber. It has a subdial at 12 o’clock with a 30-minute register and a 12 hour register in a subdial at 6 o’clock.At 8 o’clock there’s a red pusher to choose between the ‘chrono’ or ‘regate’ function, indicated in a small aperture in the dial at 12 o’clock.

As a chronograph the watch operates normally and the cubes have no function, but by selecting the regatta function, the 5 cubes turn red and the 30-minute register will leap rightward and move the 5-minute countdown displayed in red into counter. This way the minutes before departure are taken into account in the final measured time. The countdown will be indicated by the changing colours of the five cubes on the right hand side of the dial.

Since 2005, during the Monaco Yacht Show, generous watchmakers participate for the exceptional Only Watch charity auction, to raise money for neuromuscular diseases in general and Duchenne muscular dystrophy in particular. The concept for each contribution is to create a truly exceptional and indeed one-off piece. 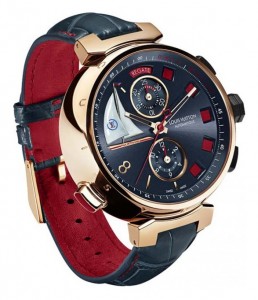 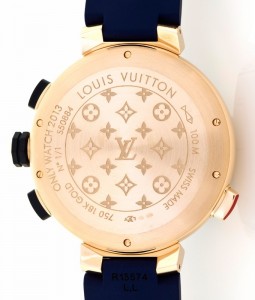 In 2013 Louis Vuitton has participated in the event for the fourth time, by offering a unique Tambour Spin Time Regatta watch, designed in collaboration with the young Paul Pettavino (struggling with the disease himself) and the Louis Vuitton team. 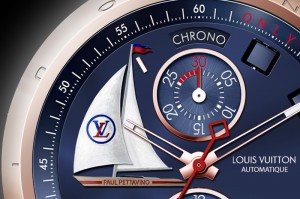 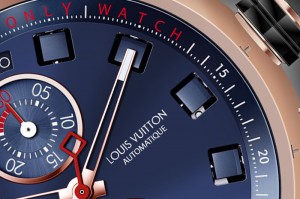